Fort Worth Feeds A Multitude 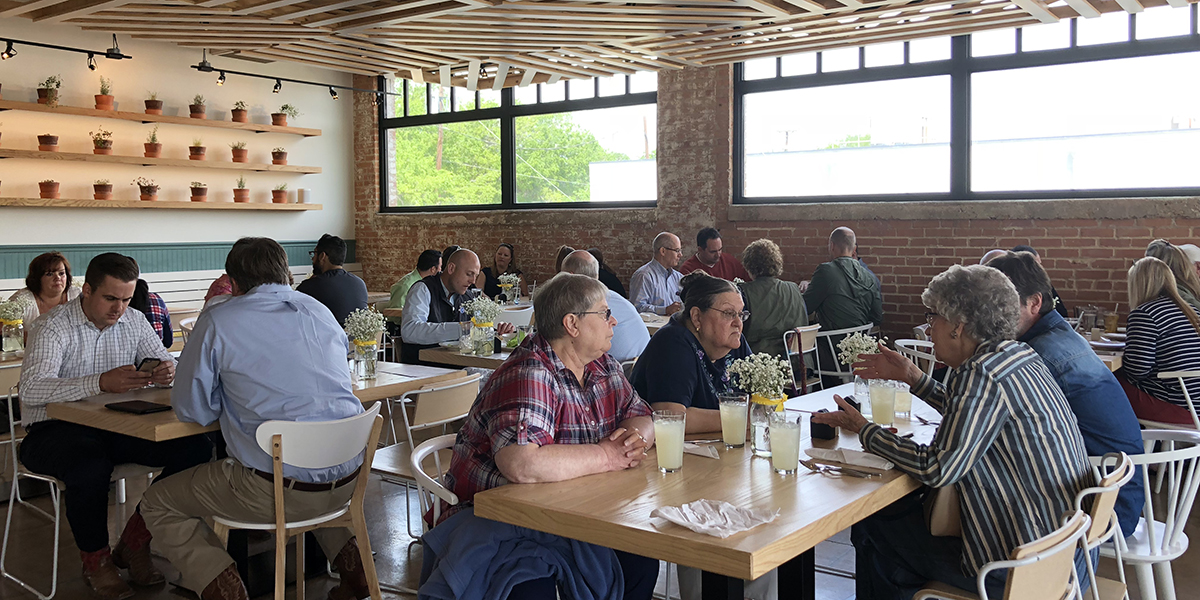 I’ve always been slightly consumed with the miracle of the loaves and fishes.  But I never really understood what goes into serving a multitude of people.  …that is until now.

This week we will hit a huge milestone at Taste Community Restaurant as we serve our 10,000th meal!  I think this milestone is miraculous; and I believe it is by God’s grace and favor that we were able to accomplish this.  But what He has accomplished at Taste only proves the grand-ness of the miracle Jesus fulfilled in a single day when he fed the multitude.

As evening approached, the disciples came to him and said, “This is a remote place, and it’s already getting late. Send the crowds away, so they can go to the villages and buy themselves some food.”

Jesus replied, “They do not need to go away. You give them something to eat.”

“We have here only five loaves of bread and two fish,” they answered.

“Bring them here to me,” he said. And he directed the people to sit down on the grass. Taking the five loaves and the two fish and looking up to heaven, he gave thanks and broke the loaves. Then he gave them to the disciples, and the disciples gave them to the people. They all ate and were satisfied, and the disciples picked up twelve basketfuls of broken pieces that were left over. The number of those who ate was about five thousand men, besides women and children.

If you find it hard to wrap your head around the logistics of Jesus’ miracle that day, you’re not alone.  Feeding thousands of people is not easy.  At Taste, it took a significant amount of food, hundreds of volunteers, and months to accomplish what took Jesus a single day.  And even then, I feel like what God has done at Taste, in our first six months, is supernatural.

It took us a significant amount of food to feed a multitude of hungry Fort Worthians.  When the disciples stared at the two fish and five loaves of bread they had on hand, I understand why the disciples asked Jesus a clarifying question about the quantity of food on hand.  To serve 10,000 people at Taste Community Restaurant, it took 2,600 pounds of potatoes to make the crispy potatoes we served.  We also prepared 2,080 pounds of beef, and 780 pounds of chicken.  The team made over 4,000 hamburger buns from scratch.  And we served almost 100 pounds of salad greens.  So when you compare this to a single small grocery bag of food, it makes you wonder.

After contemplating the amount of food on hand, I wonder if the disciples looked around at the staff available to assist in distribution.  Not only did Jesus feed the multitude with two fish and five loaves of bread, He did it with a team of 12!  At Taste Community Restaurant, in order to feed 10,000 people, it took 392 volunteers.  And the average volunteer served over 12 hours.  Our volunteers are the life blood of our organization, but I would not have happened with just 12.

And after considering the amount of food, and method for distribution, I get consumed by the timeline: one day.  Jesus fed 5,000 people, plus women and children, in a day.  At Taste, it took 6 months to feed 10,000 people.  But we also spent years fundraising and preparing the space that we use to serve our community today.

The truth is it isn’t possible to feed a multitude with a few loaves and fishes… but it did happen.  That’s what makes it a miracle.  And that’s what defines who Jesus is.  As we celebrate our first six months of lunch service, I’m reminded of the many people who also thought Taste wasn’t possible.  Sometimes that was me.

It is easy to get caught up in what will be on the menu, if we’ll have enough volunteers each day, and if enough folks will come in to eat each day.  But it happened, we’ve fed a multitude.  We showed up each day, and God came through.  Our menu has received rave reviews.  Volunteers arrived daily like Manna from heaven, often in the nick of time as we unlocked the front door.  And our community showed up each day to eat!  It happened.  And it’s only the beginning of what God is doing here.  …stay tuned.

It’s okay if you didn’t think it was possible or if you still have doubts.  You are welcome here too.  I’m sure the first guy who took a piece of the bread from one of the disciples that day felt the same way.  But he also participated in a miracle that day.

Continue reading about who we are

Julie Williams is the wife of Taste Project founder, Jeff Williams.  She has volunteered with Taste Project since it’s inception in 2012, and she frequently writes for Taste Project.